ISTR 2020 will take place at Concordia University, which is easily accessible by the nearest metro station: Guy-Concordia – right next to the university.  It is located in one of the busiest areas of Montreal’s downtown and there is plenty to see and do right in this area of the city. Its multipurpose and multiethnic character is illustrated by a staggering number of restaurants, pubs, stores, apartment buildings, and small businesses.

Guy-Concordia metro station was inaugurated in 1966 as part of the first metro line that was built to make the provision of public transport in Montreal more diverse and practical leading up to the 1967 International Exhibition. The Expo would transform Montrealers’s view of the world at a time when the province was coming out of the “Grande Noirceur” (The Great Darkness of conservative politics in Quebec) and diving right into the “Revolution tranquille” period of intense socio-political change in the province.

Coming out of the station, you will have no problem finding a place to eat no matter which direction you might take. The area remains alive at all times!

You might find the Putting-Edge Glow in the Dark Mini-golf to be a fun experience. Yes, this is an inside minigolf experience in a dark but amusing environment! An unusual and relaxing group activity in a place where the outside weather does not matter (1259 Guy street, 514-507-8106). A particularly fun activity if your children are with you during the Conference.

For those who appreciate fine arts, the

, just a few minutes from the metro, is a MUST!  Founded in 1860, the MBA is the museum par excellence. Since 2013, a patrimonial church adjacent to the museum is now part of the museum. The Salle Burgie, as it is now known, has been transformed into a 444 seat auditorium for concerts and conferences (1339 Sherbrooke street west).

Interested to see what is left of the New France period in the Montreal downtown area? You can visit the Domaine des Messieurs de Saint-Sulpice (2065 Sherbrooke west). The vast and green domain harbors the Tower, the College de Montreal, a private French secondary school for boys and  girls, its buildings and chapel, the Grand Seminaire de Montréal also with its buildings and chapel, and the last remnants of the old fort of the Mission de la Montagne (1675). It is located at the foot of the fort that gave its name to the street du Fort, where Marguerite Bourgeoys founded a school for young American girls. During the summer, the Grand Seminaire organizes visits which again provides an opportunity to learn about the rich history of Montreal. 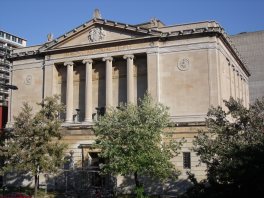 The Montreal Masonic Memorial Temple is a historic masonic temple located on the corner of Sherbrooke Street and St. Marc Street (1850 Sherbrooke Street West, Montréal, 514 -933-6432). Opened in 1930, the work of the architect John Smith Archibal was designated a National Historic Site of Canada in 2001, as an example of one of Canada’s most elegant buildings in the Beaux-Arts style. The Masonic Memorial Temple, as its name suggests, was conceived as both a meeting place for the Masonic order as well as a memorial to the Freemasons who served and gave their lives during the Great War of 1914-18. An interesting fact about the Temple: the first true Masonic temple was established in 1825, in Old Montreal, where the Marché Bonsecours stands today.

Thank you to Lorraine Bergeron, MA student, Concordia University for writing this post.